Photos in Google Doc need to be restored
10/2 Cotton
Sett:
32epi
Picks:
30ppi
Weft yarn:
10/2 Cotton
Width on Loom:
7 inches
Notes:
Introduction: the Item This aumônière (alms purse, or pouch) was made as a gift for Mistress Margaret de Mey on the occasion of her elevation to the Order of the Pelican. Margaret often dresses in 14th Century fashion. Therefore this aumônière is based on those in use in the 14th Century. Aumônières were an essential accessory, as clothing of this time did not include pockets. Even noble women of this era are depicted using these items. As this entry is entered as heraldic display, this documentation will forgo further discussion of aumônières themselves. For more information on aumônières, read “Aumônières, otherwise known as alms purses.” As a gift for elevation to a Peerage the choice was made to use her Arms as the overall design to show her increased station and her ownership of the purse.

Medieval Practices Heraldry was commonly used in the Middle Ages to show nobility and ownership. This documentation will primarily focus on the use of heraldry in aumônières, or alms purses, and the practices revolving around aumônières. The Medieval Dress and Textile Society (MEDATS) hosted a day of lectures in 2005. The topic for the day was narrow wares. One slide used during the day referred to a heraldic pouch held in the Victoria and Albert Museum. After this session the entrant traveled to the Victoria and Albert Museum to study this pouch, see left photo from the Victoria and Albert Museum. This pouch is held in the Victoria and Albert Museum, British Galleries, room 58b, case 5. The museum curators date this pouch to 1540, and state it was made in England (Victoria and Albert Museum). This heraldic purse shows the heraldry of several families. This style of purse and the style in which the heraldry is displayed shows the heraldry of four families allied through marriage. This purse shows the allegiances through Sir Henry Parker and Elizabeth Calthorpe. The heraldry was executed using very fine embroidery (1,250 stitches per square inch in silk). As the entrant did not have the time to do such fine embroidery and was studying damask woven a drawloom, the choice was made to weave Mistress Margaret’s arms using the entrant’s drawloom, discussion to follow in Construction. As the purse held in the Victoria and Albert Museum was made to commemorate a marriage, and was likely not actually used to hold items, the decision was made to use a different method for constructing the purse, see Construction for further information.  Aumônière: Construction and Decisions Margaret’s registered arms are Gules, three water bougets argent, blazon from SCA Laurel Sovereign of Arms Online System for Commentary and Response 04-2009 LoAR. The heraldry was constructed using a drawloom using a draft of the artisan’s own design.
Heraldry.jpg

Several drafts were sampled to achieve optimal results, see image below. The heraldry was created in the cloth using a ⅓ broken twill binding and 10 pattern shafts. This required the artisan to set up 2 harnesses on the drawloom, the binding harness and the pattern harness. Eleven pattern shafts were set up, one shaft was reserved for a border/seam area and ten were set up in a point threading to create a symmetrical design. The draft was written to offset the heraldic charge as used in the Margaret’s device. One set of charges is done starting on shaft 1 the other offset charges are done starting on shaft 10.
samples.png

In deciding the construction for this item, the artisan considered a variety of extant examples. A mid-14th Century purse held in the Metropolitan Museum’s Cloisters Gallery, the above mentioned wedding purse, a purse made from Lampas woven cloth from the late 14th Century held in London  (Crowfoot, 2001 ;Jones, 2005; Kelly, 2014). Although the purse held at the Victoria and Albert Museum shows that heraldry was displayed on purses, the artisan did not find this construction particularly useful for holding personal belongings (Jones, 2005). The London purse shows that purses were not only embroidered with heraldry, but were also decorated other designs (Crowfoot, 2001). The artisan chose to model the cut and construction of the purse after the Alms purse from the Metropolitan Museum’s Cloisters Galleries, see left (Kelly, 2014).  Note the drawstring and handle were constructed using fingerloop braid, also commonly used in this time period.
1340_rect_otherside_b+w_large.jpg

Damask cloth was woven in Italy as early as the mid-13th Century (Geijer, 1979). As discussed previously a purse from the 14th Century was executed in Lampas. Damask differs from Lampas in that the damask warp is seen and only one weft is used to create the cloth, whereas lampas uses one warp, which is not seen, and multiple wefts are used to create the design. Damask cloth was availablein the 14th Century, therefore the artisan felt appropriate to use in the creation of this purse. As this entry is being judges according to heraldic display criteria, further discussion of the weaving technique is not included in this documentation. The artisan is available to answer questions regarding the weaving technique. Normally damask and lampas were woven in silk, in fact Geijer (1979) proposed these weaves were developed when silk thread became widely available as it better shows off the sheen of the thread. This damask was woven using cotton as it is far less costly in terms of purchasing the thread and the amount of time it takes to warp and weave the material. As this artisan was newly pursuing the art of weaving damask, it was decided not to risk such costly and more difficult material. This is not to say the threads used are not fine, in fact the cloth was sett at 24 ends per inch.   Conclusion In conclusion this entry is a heraldic purse made for Mistress Margaret de Mey to celebrate the occasion of her elevation to the Order of the Pelican. Mistress Margaret’s arms have been created using a damask weave on a drawloom. The arms were created by Mistress Margaret and displayed in a cloth purse based on an extant 14th Century purse. Works Cited   Crowfoot, E. Pritchard, F. Staniland, K. (2001). Medieval Finds from Excavations in London: 4, Textiles and Clothing c.1150–1450. Woodbridge: Boydell Press, 2001. Geijer, A. (1979). A History of Textile Art. Sotheby Parke Bernet Publications. Harris, J. ed. (1995). 5000 Years of Textiles. British Museum Press. Jorgensen, L.B. (2002). Scandinavia, AD 400-1000. Jenkins, D. ed.The Cambridge History of Western Textiles. Cambridge University Press. Jones, EM. (2005). Notes from study of extant purse held at the Victoria and Albert Museum. Kelly, T. D. (2014).  Aumônières, otherwise known as alms purses. Accessed 24 March 2014. 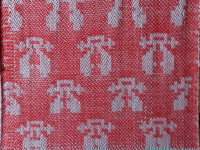 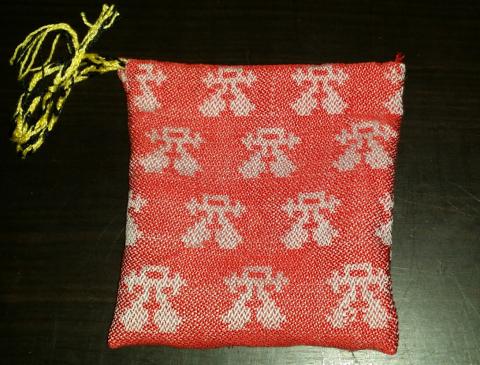