Those of you who follow me elsewhere will know I spent about a month traveling around the US. I did quite a bit of spinning while traveling, because weaving just does not fit easily in an airline suitcase. Yes there are looms that will, but i have leant those out or have group projects on them at the moment. You will also know that since my return to the UK I have been having a hard time getting to sleep at an hour which is normal for me! My toddler is a 5-6 am wake up kind of kid, so I need to get to sleep early. I find my mind very active between 21:00 and 0:00 these past few nights. One of the things I have been thinking about is spinning and, unsurprisingly, weaving.
Right: the yarn I spun on our way from Vegas to Salt Lake City.


I was recently pondering my spinning and why it fits my life more easily now. As a working mom, it is far easier for me to take a drop spindle to work and do a bit of spinning on my breaks. A drop spindle is also easier to carry around while spending time outdoors with my son. 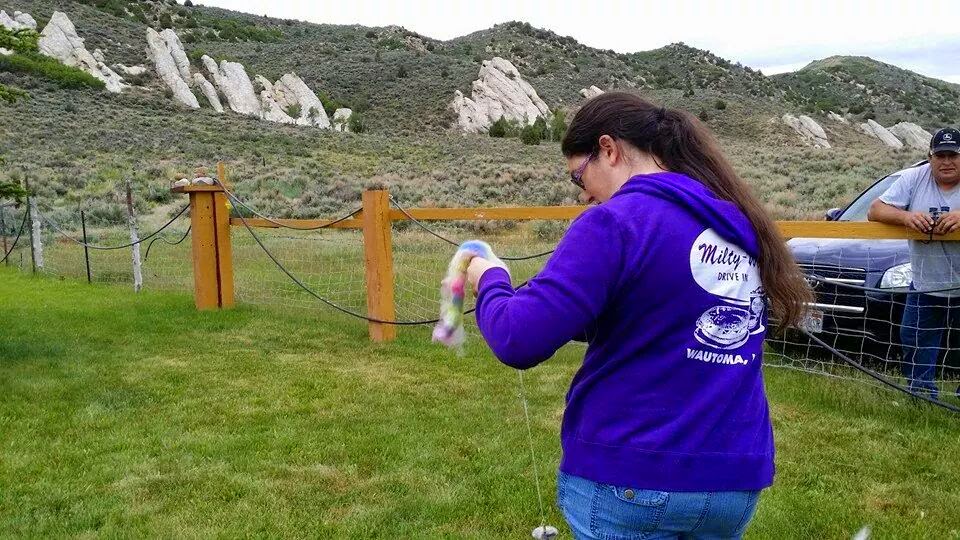 Me spinning and chasing TAJ at the cabin.

This lead me to ponder the transition of spinning, which was in ancient and early medieval times primarily women's work, to a male dominated profession. Well this is at least my current understanding. Admittedly I have not done the in depth research into weaving and spinning guilds which I have intended to do. However, it does at this time, make sense to me that while spinning was done on a drop spindle it would fall in the domain of women, who are in charge of rearing children. It is easy to understand how, particularly in Norse culture, spinning and weaving were tasks accomplished by women. In the morning while supervising the children, one can easily get out the drop spindle when the children are occupied and still be able to supervise them. It  is also an easy and quick matter to put down your spindle to redirect your child's attention, pick something up for him/her, etc. Weaving is thought to have been done by every women in Norse villages. Each women could take her turn tending the village children and then have a turn at the loom. I have wondered if Norse children were all put down to nap together, so the women could tend to lunch, cleaning up, and possibly weaving.

We assume the children were taught to help with chores as soon as they were able, which was likely far sooner than they are now. Abby Franquemont writes that Andean children were taught to spin as soon as they could sit up on their own! I'm hoping to learn the trick of this form her next weekend! I would love to teach TAJ to spin. He loves watching my spindle and this past summer began to turn the spindle for me, though his method is a bit more batting the spindle than turning/flicking the spindle, we'll see what we can do. 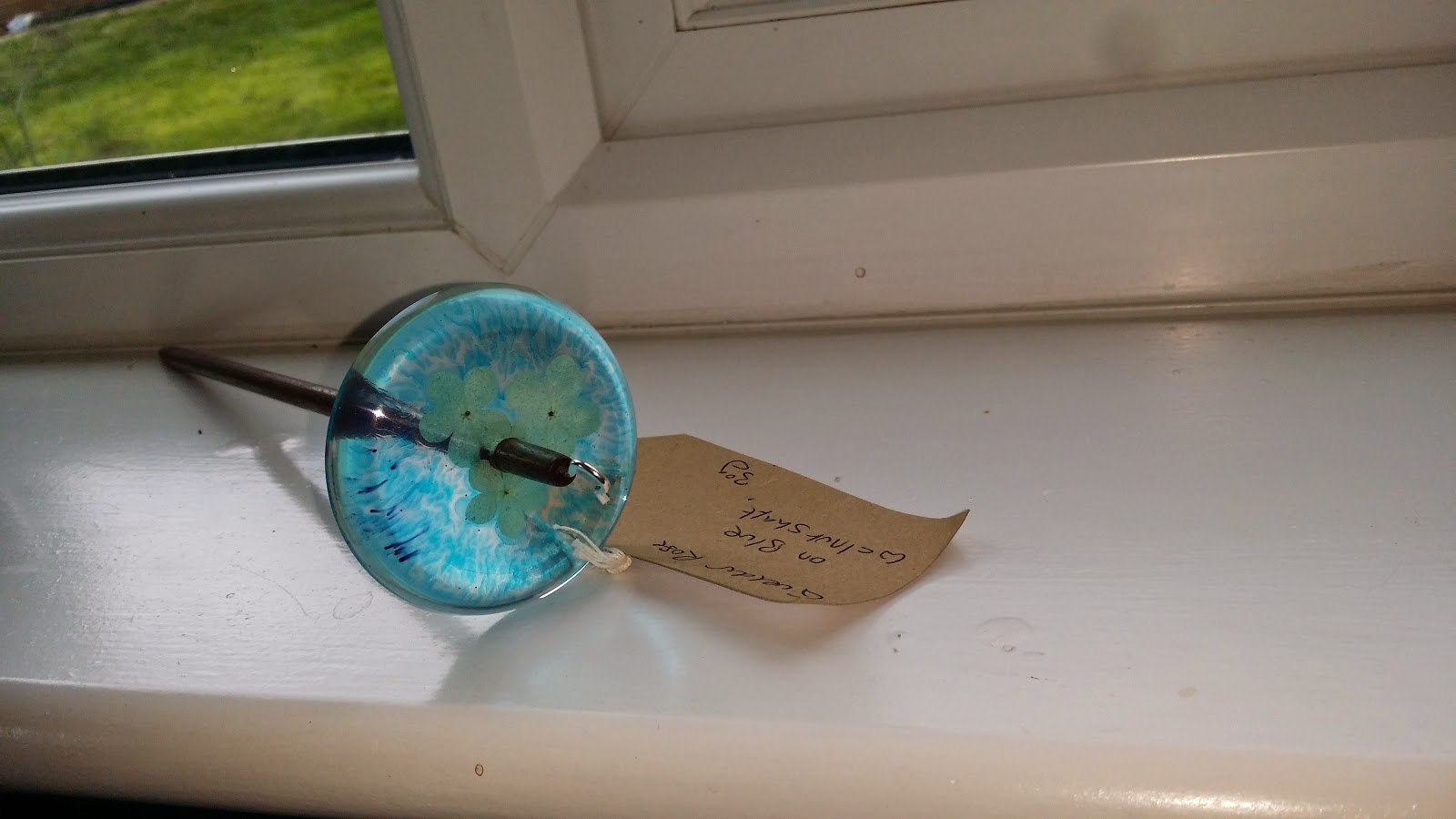 Spindle from Wild Craft's Spindle and Fibre Club 2014
As spinning and weaving technology advanced and they became more mechanized and organized into guilds, it is assumed they became male dominated professions. Some of this may have been due to the prevailing attitudes of the time, but I think some of this has to do with the arts becoming less compatible with  the rearing of children. I used to be a far more productive weaver. I had hundreds of hours to while away at the loom. Now those hours are spent with my son, who as previously stated loves to watch me spin and in fact weave too. Although he likes to watch me do these things, he does eventually want to help. He is able to help spin, a bit, but his intended aid and small attention span takes me away from spinning or weaving much sooner than I would on my own. I do not weave on a vertical loom often, mostly for tapestries which I intend to focus on eventually, but cloth always draws me back. Vertical looms, as we know were used by Norse weavers, are more easily left at any interval and picked back up. I can imagine Norse weavers with talismans which would be hung on the next heddle rod to quickly mark one's place. This is not so easily done on a treadle loom. I can simply stand up from my horizontal loom and walk away but unless I have left it at the starting point it takes a bit more time to figure out where I was when I left. So now we find ourselves back at the beginning, I spin more often now, because it is easy to do while also spending time with my son. I rarely however spin on my wheel. Anyone who has spent more than 5 seconds with a child will know why, if you have a child and a big spoked wheel turning round and round the child will stick their hand in the wheel. This will of course end in tears. Children are creatures of habit so to speak, and although they do learn, I'm not yet ready to find out how many times my son would stick his fingers in the wheel before he learned not to do so again!
So there you have it my thoughts on why, as spinning and weaving progressed they became more a man's profession than a woman's. I am happy that we all enjoy these hobbies together now. It is pleasing that they are predominantly women's hobbies now, but the men who join in are good crack and teach us just as much as our fellow woman. 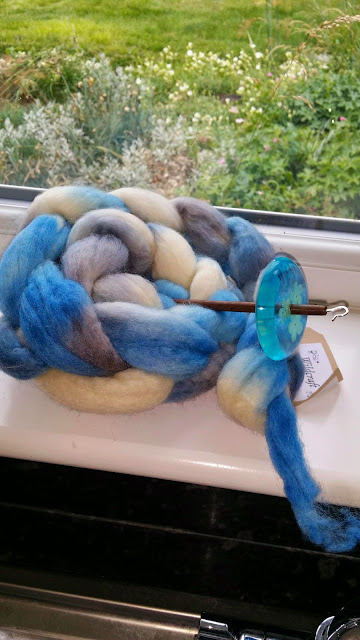 The woven fabric has been used to create a pair hoods my husband, myself, and incidentally our son who often ends up wearing the unlined hood. The hood design is based on the Skjoldehamn hood (Løvlid, 2009). This hood was carbon dated to 995-1029 AD (Løvlid, 2009).

These are my first taquete samples. These samples were woven on my drawloom as part of an experiment to see how weaving taquete would work on a drawloom. There is much debate as to whether there sumptous fabrics were woven on the drawloom or using heddle rods.

These are the first samples I have produced on my drawloom. It took me ages to get my drawloom set up, but now that it is ready to go I'm cruising along and having a lot of fun! Here are my samples so far. I will come back and write more about each one soon!